As we move into a mobile age where methods are changing in the way we receive information, marketers are starting to shift from the classic marketing approach to new social media marketing strategies. Two major changes that have occurred are variations in the type of marketing language that is being used and the direction of the communication.

Social media marketing language is much more informal than that of classic marketing. Sometimes this can cause big trouble for a company, as was the case in 2011 when Kenneth Cole tried to make light of the Egyptian Spring while trying to promote their new spring catalog. The negative feedback received after this posted was immediate and forced them to quickly remove the post. As Sibley explains in her hubspot.com article, “humor doesn’t work if you’re newsjacking something contentious”. 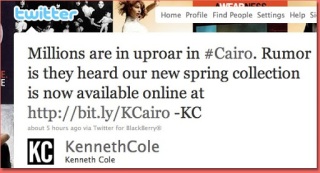 With the classic marketing approach, this never would have happened. It would have been combed to ensure the message was clear and non-offensive. Although taking a more informal approach can humanize the brand and help them relate to their audience, it can easily cross the line. In cases like these, it would be wise to adopt the “legally safe” mindset from the classic approach when trying to reach the audience through humor. The way a brand uses language also varies depending which platform they are using and what type of audience they are trying to reach. Language used in LinkedIn would appear more formal because it is mainly used to form business connections and gain employment.
While language is important to consider, the direction of communication can also be a factor in a brand’s success. Unidirectional communication used in the classic marketing approach is being replaced by the bidirectional approach adopted by social media channels such as Facebook and Twitter. With the classic approach, customers don’t have the ability to engage with the brand and have no way to establish a relationship. Having a two-way conversation with the audience allows the brand to learn what is working and what they need to tweak in order to make lasting connections that build a loyal customer base. Not listening to the conversation can result in contempt from customers when they don’t feel like the brand cares about a problem they might be having. It can also open the door for the competition to sweep in and rescue the customers when the brand isn’t minding their shop.
Even though the brand participates and engages with the audience, it doesn’t mean that brand supporters can’t cause harm on its behalf. One example of the negative impact on a brand because of bidirectional communication comes from Daniel Tosh’s fan response on Twitter after he made a rape joke during a live show in July of 2012. Even though he tramples all over the proverbial line and his brand was created from crude, obscene, terribly offensive humor, his brand still took a hit.  Yahoo! News covered the backlash after the event. Tosh’s Twitter feed was teeming with outraged women who once supported Tosh. Teenage boys in support of rape jokes, continued the topic by replying to others with phrases like “I hope you get raped” and using “#iheartrapejokes” in their comments. Although the teenage boys were Tosh’s loyal fans, the comments they made were very negative and turned a lot of people away from Tosh. While most brands benefit from bidirectional communication, it can also cause great harm.